Friends of Thailand might be familiar with anecdotes about the Thai monarchy that has stood fast alongside the Thai people through thick and thin — from combatting poverty throughout the ages to fighting the COVID-19 pandemic since last year. Their Majesties the King and Queen, like their forefathers, have continued to take this mission on board in all types of situations, whether they be during a crisis or in times of peace. Their mission to alleviate any sort of suffering that may befall the people, and to improve the people’s quality of life, education and health, is a serious one — one that has been upheld as a solemn oath to the people, a life-long legacy that was passed down from erstwhile generations of kings.

The Royal Family works in the mindfulness of a simple but practical rationale, that all Thai people should have access to basic public services even in the most remote areas of the country, so that they are able to earn a decent livelihood in good health and happiness. That is what the monarchy believes it owes to its people. Since Thailand is not a rich country, there is a need for all stakeholders to pool resources in order to yield meaningful social impact and change. That is why the Royal Family has been continuously devoting their energy and personal funds behind the scenes, building upon and mobilising collective social efforts even before the term ‘PPP’ or public, private partnership was coined, to complement government mechanisms and draw participation of civil society, private sector and individual philanthropists. Combined with the ownership of local communities and volunteerism, such efforts would strengthen their actions towards this goal. With or without the opportunity to publicise themselves, the Royal Family have continued their generations- and centuries-long commitment with steadfast determination.

His Majesty the King’s Grandfather, Prince Mahidol, was aware that a strong public health system was crucial to national development and chose to study medicine at Harvard University, determined to lay a solid foundation for teaching medical sciences in Thailand. He offered a considerable sum of his own money as scholarships for talented students to study medical sciences, nursing and medical research in the United Kingdom. These seeds planted in the past have nurtured a legacy on the development of modern medicine and public health services in Thailand to this very day.

The King’s Grandmother, Princess Srinagarindra, supported her husband’s endeavour by establishing the Medical Volunteer Foundation in 1974 to ensure that the population in remote areas have access to medical care. The Foundation sends volunteers to treat patients in the most remote areas of the country, which have limited access to public healthcare facilities and empowers community service in public health, another powerful tool in Thailand’s public health system.

The King’s Father, His Majesty King Bhumibol Adulyadej The Great, through the Crown Property Bureau, funded the establishment of Siam Bioscience Co. Ltd. in 2009, to specialise in manufacturing biopharmaceuticals. The company’s excellence has since been internationally recognized, as it became the only manufacturing plant in Thailand to be certified with the international manufacturing standards of PIC/s GMP, ISO9001:2015, and ISO17025:2016. Subsequently, in 2020, the British-Swedish pharmaceutical and biopharmaceutical company, AstraZeneca, in its fast quest to set up a manufacturing base for its COVID-19 vaccines in Southeast Asia, found that Siam Bioscience was the only qualified choice as its local partner to produce AstraZeneca COVID-19 vaccines for Thailand and Southeast Asia.

Siam Bioscience Co., Ltd., the first and only biopharmaceuticals manufacturer in Thailand, was founded in 2009 to preserve and continue what His Majesty the Late King Rama IX initiated to promote public health and enable access to high quality but affordable pharmaceutical products to the public. Source: Siam Bioscience website

According to James Teague, Country President of AstraZeneca (Thailand) Ltd.:

“The Thailand vaccine production facility, critical to not only the Thailand Government’s fight against the pandemic but also to the other eight Southeast Asian countries the plant will export to, has passed the Good Manufacturing Practice (GMP), a system ensuring that products are consistently produced and controlled according to quality standards. The company’s plants also achieved multiple international standards such as ISO9001, ISO17025, and ISO13485. Each batch of the vaccine undergoes more than 60 different quality control tests during its journey from manufacture to vaccination. The process takes time, and it is designed to assure every person who is given the vaccine that it is of the same high quality that can be expected from any AstraZeneca product.” Moreover, AstraZeneca vaccines produced by Siam Bioscience have also passed the quality testing at AstraZeneca’s designated laboratories in Europe and the US.

Building on this royal legacy to observe and support the needs of society, Their Majesties the King and the Queen have continuously monitored the COVID-19 situation with concern since the very beginning of the outbreak in Thailand last year, knowing that the impact upon the population was complex and would last for years to come.

To assist the government in tackling the crisis, Their Majesties’ contributions were multifaceted and well-thought out, bringing meaningful impact across high-risk communities nation-wide. These include donations of essential life-saving medical equipment and supplies to prevent, test and treat patients, as well as relief to alleviate economic and social adversities, and even support for children-turned-orphans whose parents succumbed to the disease. Most recently, donations have also been extended to finance the setting up of field hospitals, community isolation centres, and quarantine sites all over the country to help reduce the burden of hospitals in treating COVID-19 patients. 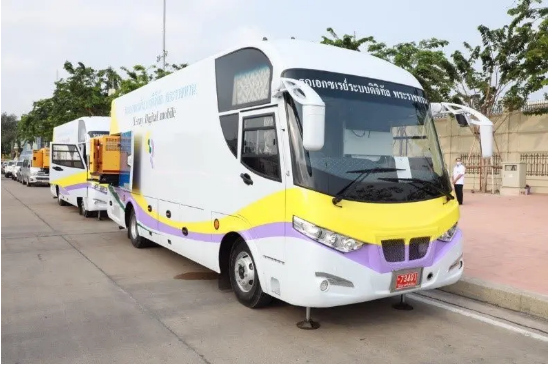 The value of contributions which came from Their Majesties’ personal funds are estimated at 1.3 billion baht. These include, inter alia, 488 ventilators, 740,000 sets of Personal Protective Equipment (PPE) for frontline workers and health care professionals, 624 power air-purifying respirators (PAPR) for use in operation rooms and ICUs; eight ambulances for transporting patients in remote areas, equipped with 4G communications technology; modular swab units equipped with pressure-controlled ventilation, decreasing the risk of infections for medical personnel to 20 hospitals nationwide; 36 Biosafety Mobile Units for active case finding missions, particularly in high-risk areas; funding of 243.8 million baht to the Department of Corrections to procure medical equipment to care for inmates in penitentiaries who had contracted the virus; and 227.4 million baht worth of care packages to 659 communities in Bangkok and other provinces as well as freshly cooked meals for medical personnel and communities in high-risk areas of infections in Bangkok. 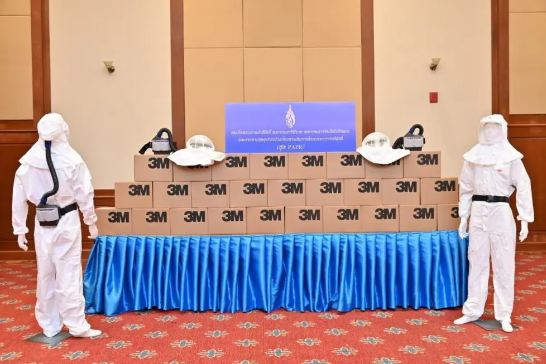 Her Royal Highness Princess Chulabhorn, as President of the Royal Chulabhorn Academy, has also played an active role in advancing medical science and care in Thailand. The Royal Chulabhorn Academy, as an advanced public health and medical research institute under state supervision, has stepped up efforts to help the country secure more vaccines against COVID-19, sharing the responsibility to help save lives in a crisis situation. Through an established procedure under the law, the Academy has thus far procured two million doses of Sinopharm: one million doses arrived in Thailand on 20 June 2021, and another one million doses arrived on 4 July. Despite these efforts, Thailand, as with many other countries, is temporarily facing a shortage of vaccines. This can be attributed to inequitable distribution of vaccines around the world, as well as an overall shortage of vaccine supplies, caused by circumstances in the global vaccine industry and supply chains as acknowledged by the World Health Organisation. On its part, the Thai Government is also doing all it can, leaving no stones unturned and working closely with both the public and private sectors of other countries to procure more vaccines. 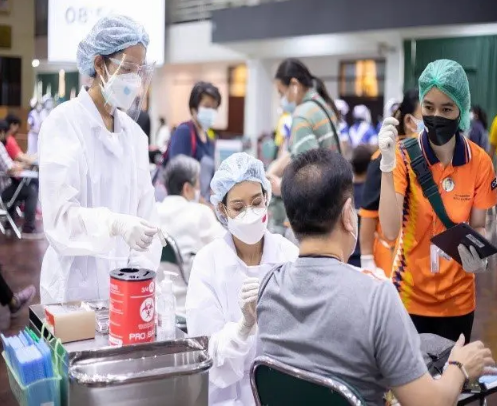 Tackling the COVID-19 pandemic certainly requires an all-of-society approach if we are to successfully save lives and bring back normalcy. The Thai monarchy certainly has been doing its part. For generations, the Royal Family has consistently supported the development of the country’s public health system. It has contributed towards both the hard infrastructure, in terms of hospitals and medical supplies, as well as the soft infrastructure, through capacity building of medical personnel and strengthening local communities: all with the ultimate goal of building a healthy and resilient society for sustainable development, and preparedness against any public health crisis.