Food for Thought: Highlights from the APEC Food Security Roundtable

Food for Thought: Highlights from the APEC Food Security Roundtable

As the world is hurtled from crisis to crisis, the U.N. Sustainable Development Goals (SDGs) will continue to fall further out of reach.

As the 2022 APEC host economy, Thailand has seized the opportunity to focus on a growing precarious food security situation (SDG Indicator 2.1.2) at its eighth and final APEC Media Focus Group (AMF) held in late September at King Mongkut’s Institute of Technology Ladkrabang (KMITL).

The eighth AMF Group, “APEC and Food Security: Sustainability beyond global uncertainties,” was joined by a multi-sectoral panel of government officials, academia, youth leaders, as well as foreign diplomats on behalf of the previous and incoming APEC host economies New Zealand and the United States, respectively. 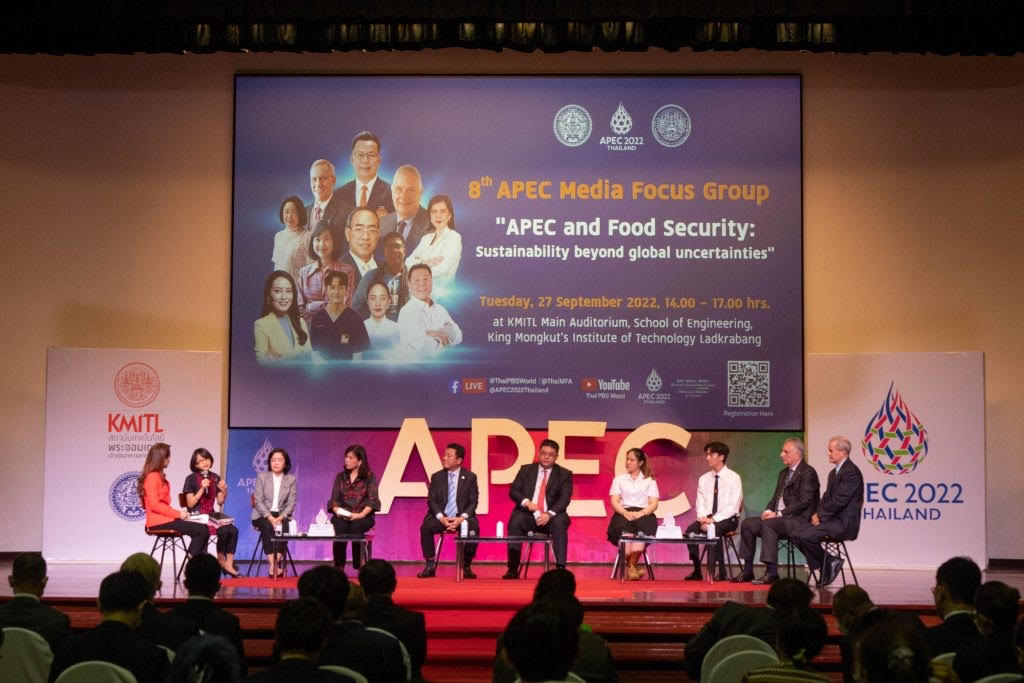 In opening remarks, MFA Director-General of the Department of Information Tanee Sangrat set the tone, underscoring how climate change and the COVID-19 crisis have threatened food security.

“At the core, food remains a matter of human and community survival,” Mr. Tanee said. “Within the international economy, the path from the fields and waters to our shops and tables is an increasingly complex supply chain which involves and affects many throughout our region and beyond.”

A roadmap for the region Pasinee Napombejra, Senior Policy and Plan Analyst of the Office of Agricultural Economics, Ministry of Agriculture and Cooperatives, affirmed that Thailand is committed to carrying forward the APEC Food Security Roadmap Towards 2030drafted the previous year, with 21 APEC economies taking the lead on one of 27 actions as outlined in the roadmap.

She also extolled the role of technology in developing precision agriculture.

“The Ministry of Agriculture [and Cooperatives] stands beside the farmers,” Pasinee stated. “We are trying to improve their livelihoods, to educate them, and ask them to be ‘Smart Farmers,’ to use technology and innovation in their practices.”

“The issue of sustainability and balance is key to our food security conversation in APEC,” Prinat asserted. “How do we conserve our natural resources and the biodiversity of our environment? How do we address sustainable waste management to head towards zero waste?”

According to Prinat, solving the issue of food waste, and by extension food security, is just one facet of APEC’s theme, “Open. Connect. Balance.” 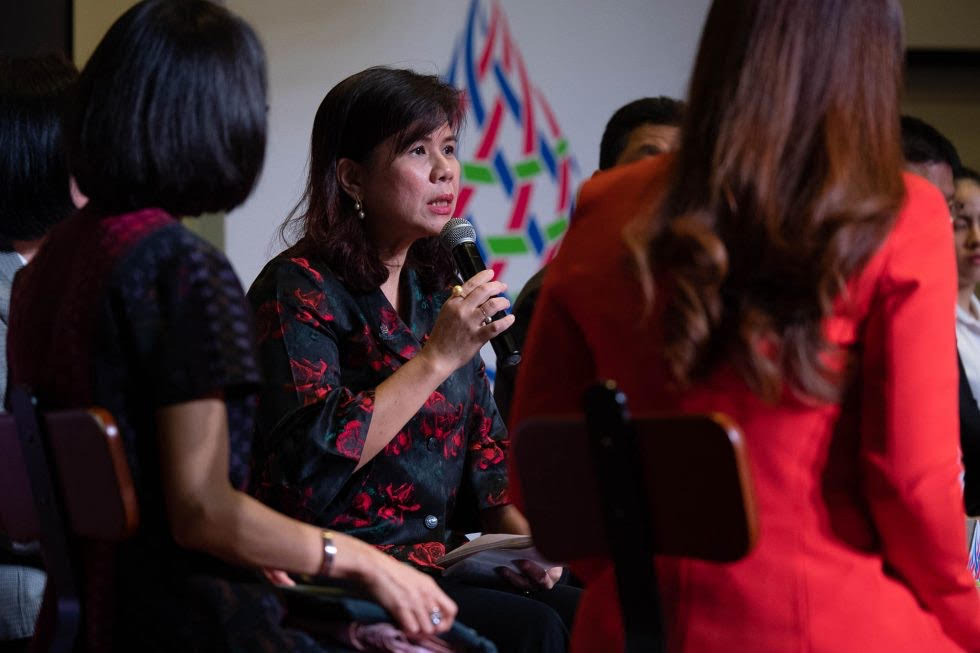 Where policymakers took a systems approach to food security, representatives from the faculty and students of KMITL focused on the creation, development, and sharing of knowledge to empower solutions for better nutrition and less food waste.

Speaking on behalf of KMITL, Dean of School of Food Industry Assoc. Prof. Dr. Naphatrapi Luangsakul said the university has been tackling research clusters relevant to food security such as innovative food packaging and food process engineering, highlighting the role of academia in promoting food for sustainability and future generations.

“We have committed to making an impact on the food world, through science, technology and innovation research, and community service,” said Assoc. Prof. Dr. Naphatrapi.

Her sentiments were echoed by Pichaya Pichaironarongsongkram, a student from the Faculty of Medicine. Pichaya, who specializes in prebiotics and probiotics, added that sharing food research could support innovations for better health.

Thanyasinee Rattanapol, a student of the Culinary Science and Foodservice Management Program, said her experience in food service opened her eyes to how much of the food waste that occurs is preventable, chalking it up to a lack of awareness.

“I think the best way to [reduce food waste] is to encourage people to learn how to utilize ingredients, like every bit,” she suggested, such as by using peels and roots to make soup stocks, in order to minimize waste. 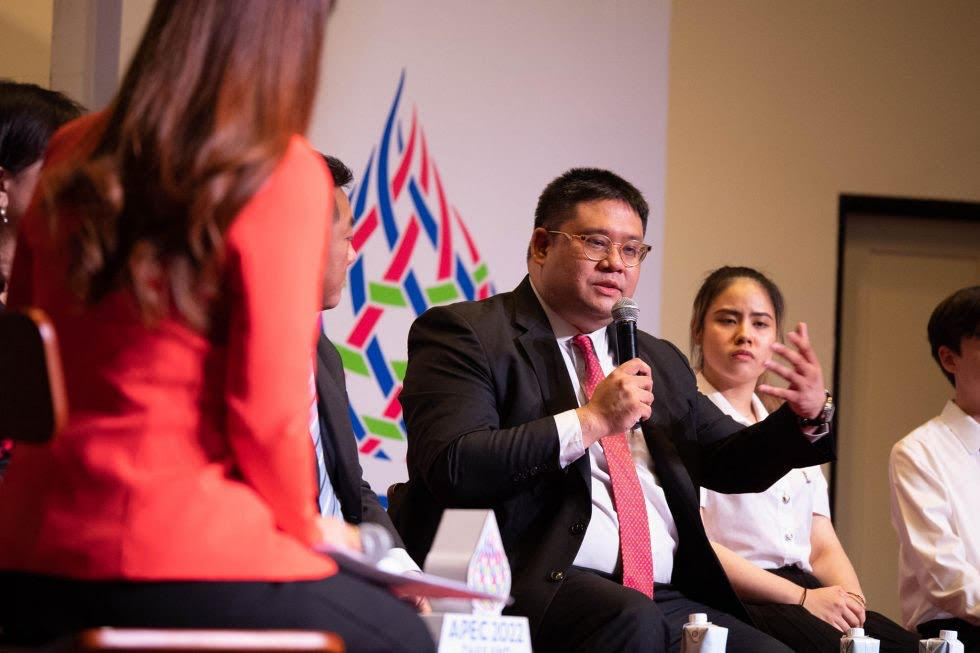 Amid geopolitical tensions and the fallout of the COVID-19 crisis, moderator Dr. Nattha asked Panu Wongcha-um, Senior Correspondent for Reuters and President of the Foreign Correspondents’ Club of Thailand (FCCT), whether food security issues would garner the media attention it deserved.

“Well, my respect to the officials in the room,” Panu prefaced, “I think it will be difficult to make food security the primary focus of the media, with everything else going on around the world. But at the same time […] I think that disruption to trade, prices of commodities, those are things that get consistent media focus.”

In fact, given the severity of COVID-19 and the current geopolitical tensions, he argued that food security is a much more severe concern than it was when Thailand served as APEC host economy 19 years ago.

For the CEO of MANTRA Plant-Based Seafood, Sirichet Chiraphongwatthana, the story is a bit more personal. Sirichet explained how he grew up living near rivers that were now polluted due to industrial seafood processing. He pointed out that while most people talk about using plant-based substitutes for beef, pork, and poultry, many APEC economies are heavily reliant on seafood.

Rather than replace animal meat and seafood entirely, Sirichet said he hopes that people will incorporate more plant-based alternatives into their diet.

Food security in the APEC agenda

Reinforcing points made by the other panelists, he stated that the key challenge of the food security issue will be capturing media attention and raising awareness in the public.

Representing the incoming APEC host economy, Dr. Steve Olive, Director of the USAID Regional Development Mission for Asia at the U.S. Embassy to Thailand, spoke in hard figures. While there are 190 million people worldwide who are food insecure, he pointed out that the World Food Programme estimates that a further 70 million will become food insecure within this year. He raised the Russia-Ukraine conflict as an important driver of this insecurity.

In response, U.S. President Joe Biden announced at the 77th U.N. General Assembly in New York that the U.S. government will provide another US$2.9 billion to address food insecurity on top of the existing budget of US$6.9 billion.

Next year, the United States expects to put food security at the top of the 2023 APEC agenda, during which the U.S. Department of Agriculture is expected to formally announce how its Food for Progress Program will invest US$22 million into “climate smart agriculture” projects in Thailand.