While Thailand has a vegan tradition, it’s not necessarily easy for vegan foreigners to find dishes that meet their dietary needs (especially if they haven’t downloaded the apps “HappyCow” or “abillion”). If you don’t know what to look for, you can find yourself confined to the collection of trendy vegan restaurants in the major cities like Bangkok and Chiang Mai.

However, with a little research, you’ll be able to enjoy a variety of traditionally vegan dishes, identify other dishes that are almost vegan and only need to be changed a little bit, and incorporate easy alternatives to popular recipes.

Vegan Dishes to Try in Thailand

Thai dishes that are traditionally vegan

Many Thai desserts happen to be fully vegan through sheer coincidence. Here are some of the most delicious vegan desserts: 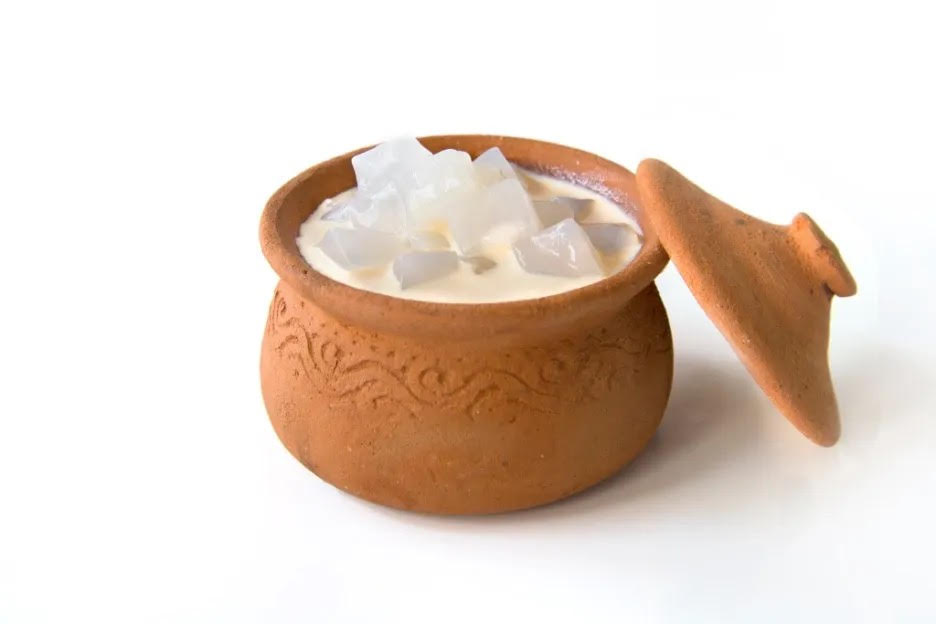 This is a phenomenal dessert on a hot day. Cold soy milk with coconut milk jelly and chunks of baby coconut make for a very satisfying, fresh dessert – especially on a hot day. Thai jellies are nearly always made with agar instead of gelatin. Many Thai desserts are made using soy milk and coconut because a lot of Thais are lactose intolerant and because Thai people love coconut.

Did you know that there are over 200 varieties of mangoes in Thailand? Everything from crunchy tangy mangoes to mangoes that melt like a fruity custard to everything else in between. For mango sticky rice it’s usually common to use a fresh sweet mango combined with sticky rice infused with coconut milk, salt, and sugar. Sometimes, it’s served with a drizzle of even more coconut milk, so if you want it less sweet, let them know to leave it off or serve it separately. 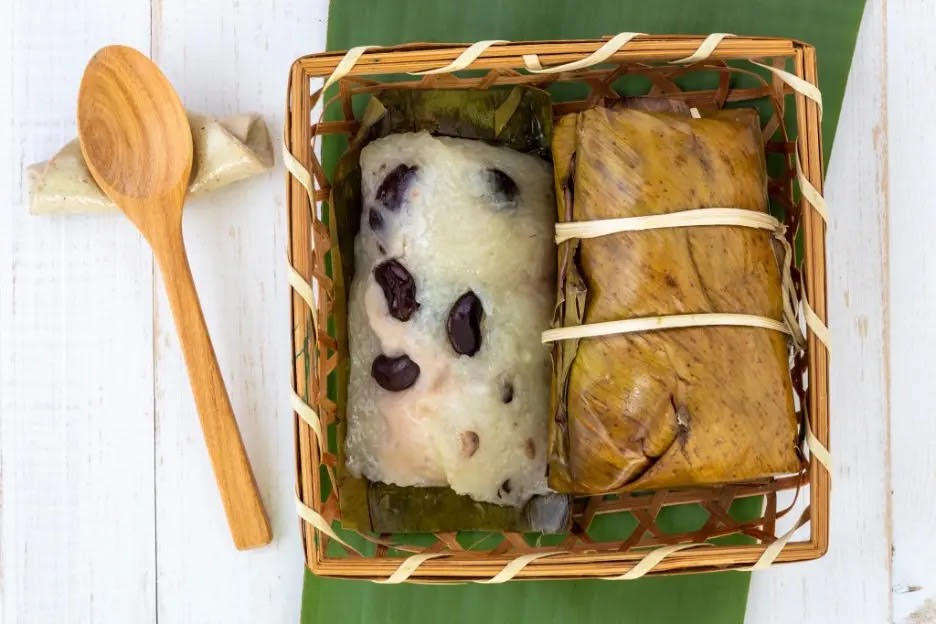 This is an authentic Thai dessert which combines steamed banana, rice, black beans, coconut, and sugar all wrapped up in a banana leaf. Like mangoes, there are many more varieties of banana than you might think in Thailand. There are 22 types that are commonly grown. For this dessert, kluay nam wa is the best choice. Shorter and more rotund than your typical Cavendish banana, kluay nam wa is less mushy and has a more subtle flavor that really lends itself to being steamed or grilled.

On the other hand, traditionally vegan savory Thai dishes are nearly impossible to find. Nearly every dish incorporates shrimp paste, fish sauce, or chicken stock in some shape or form. While these particular dishes don’t usually contain these ingredients, if you’re ordering them from a restaurant you should still check to make sure. 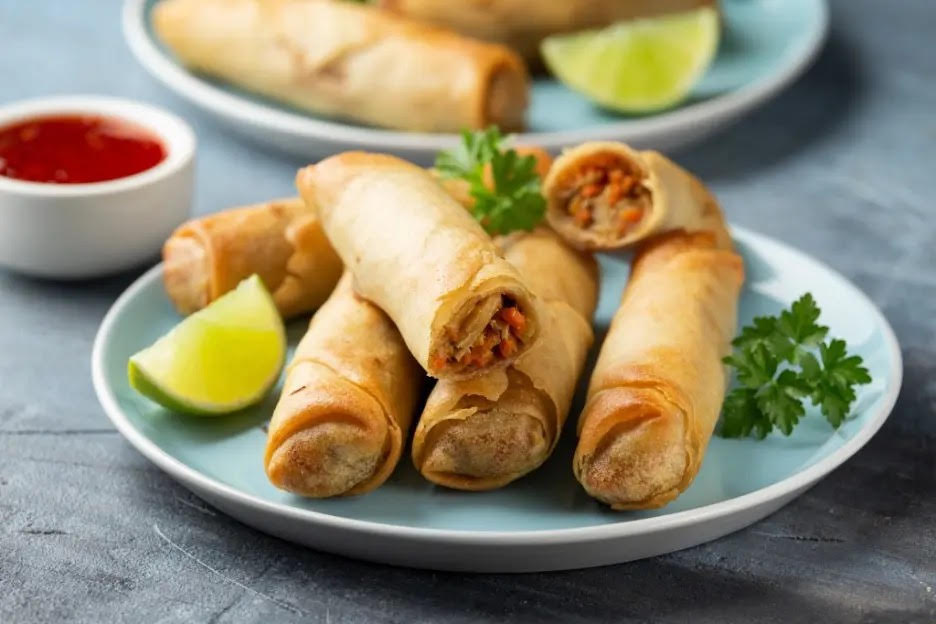 These are a fairly common appetizer you can find in most restaurants. Generally, these spring rolls are stuffed with carrot, cabbage, mushrooms, and glass noodles. Note: while most vegetarian spring rolls are brushed with a mixture of wheat flour and water, they are occasionally brushed in an egg wash. 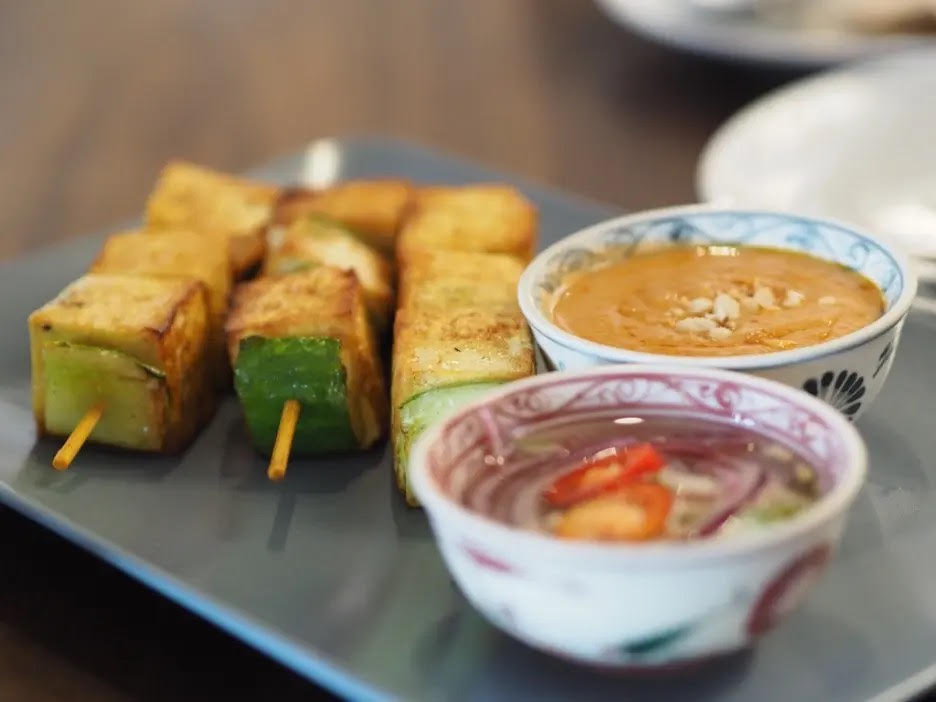 This delicious sauce is most commonly served with barbecued pork skewers and toast. But! The sauce itself is fully vegan. It’s made with coconut, peanuts, massaman powder, sugar, tamarind paste, and salt. It’s delicious on pretty much everything. You can easily pick some up from your local street vendor and then enjoy it with some fried tofu, vegan bread, or roasted vegetables.

Thai dishes you would think are vegan (but aren’t)

There are many dishes that might appear vegan at first sight but often contain an element that needs to be changed. Here are two dishes that got so close to being vegan but didn’t quite make the cut. They both happen to be incredibly tasty, though, so it would be worth finding a vendor who made a vegan version or to prepare it yourself at home. 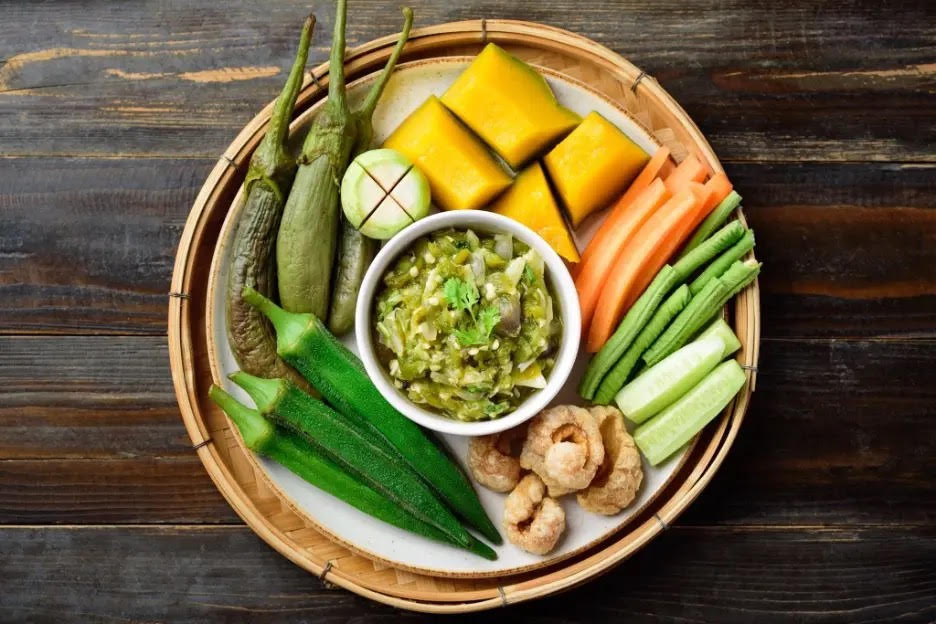 This is a northern Thai chili dip made with green chili, garlic, shallots, lime, sugar, coriander and… fish sauce. If you replace that fish sauce with fermented bean paste then you’ve got yourself a phenomenal vegan dip that goes great with all sorts of vegetables and crackers and packs a real punch. 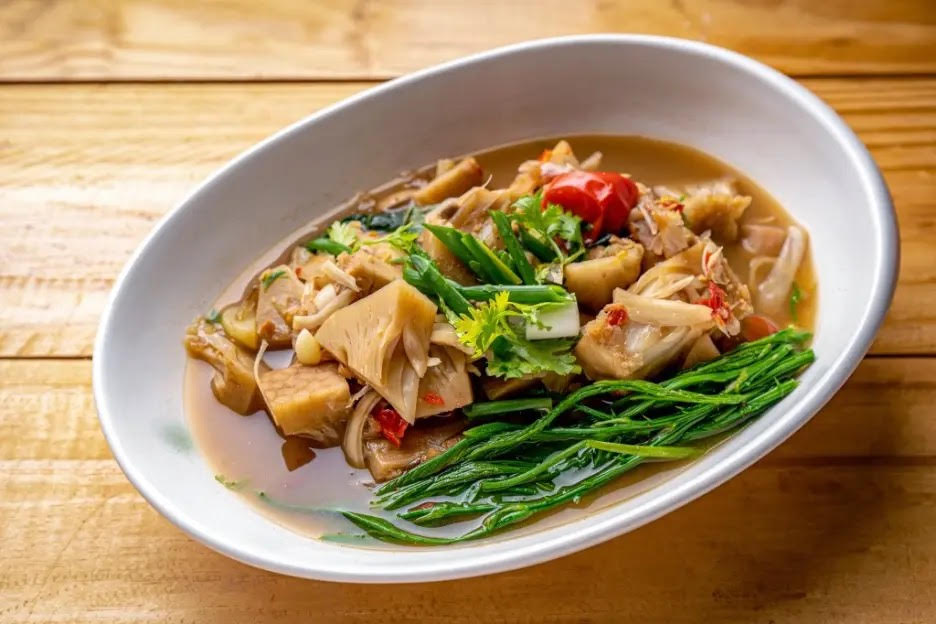 Jackfruit curry is an excellent hearty dish made with baby jackfruit, tomatoes, climbing wattle, chaplu (often confused for betel leaves), chili paste, garlic, red onions, salt and… shrimp paste. However, the shrimp paste can easily be swapped out for fermented tofu in brine.

If you’ve been living in Thailand you might have heard the term, “jay,” used to describe vegan food (it’s the modifier we saw for those vegetable spring rolls). While jay is vegan, vegan is not jay. What does this mean?

Eating jay, like eating vegan, means that no animal products are to be used. However, jae food also doesn’t use any spicy peppers, pungent food like raw garlic, or contain alcohol. When asking for jay food from your local food vendor, make sure you tell them chili and garlic is okay, or you’ll miss out on some staple Thai flavors.

Read More: How to Thrive as a Vegan Living in Thailand

Once a year during the ninth month of the Chinese calendar, it’s common for many Thai people to eat jay food for nine days as part of the Jay Festival. During this time, Thailand becomes a vegan paradise. Everything you could ever want has been modified to suit your diet.

Some of the most interesting substitutions to traditional dishes are ones that you can easily incorporate in your own home kitchen the rest of the year:

These changes will let you enjoy almost any Thai dish whether that’s green curry, som tam, or even grilled pork neck (though understandably, this one would require a bit more creativity).

Other vegan dishes to try in Thailand

The title of this piece is “Divine Vegan Dishes to Try in Thailand.” Notice it didn’t specifically mention Thai food. That’s because Thailand is a vibrant culinary melting pot with food from all over the world.

Thailand has a large Indian population. So large, in fact, that in addition to a Chinatown, Bangkok also has Pahurat—Bangkok’s Little India. While veganism isn’t all that popular in India either, Indian cuisine does boast a vast array of flavorful vegetarian dishes. The main ingredient to avoid is dairy, as Indians love using milk, yogurt, ghee, and cheese in many of their recipes

Thailand also has a big Muslim population, so there are plenty of Middle Eastern restaurants to choose from. Some dishes to try include hummus (blended chickpeas with tahini), baba ghanoush (mashed eggplant in olive oil & tahini), and falafel (deep fried chickpea & fava beans).

While navigating the pitfalls of non-vegan ingredients in Thai cuisine might feel like avoiding landmines, this really doesn’t have to be the case. Learning a little basic Thai can go a long way in explaining to hawkers and vendors what it is that you’re looking for. Having some knowledge of Thai (and international) cuisine will also point you in the right direction when it comes to ordering safer dishes. If you can handle that, there are a number of amazing vegan foods to experience in Thailand.

Of course, if you’re planning to cook vegan dishes yourself, there is a vast smorgasbord of Thai recipes to explore and it would be criminal to deprive yourself of an actual home-cooked Thai meal. Plus, you’ll get to show off your cooking skills when you have your friends over. It’s worth that extra effort!