Find insights into the origins of Muay Thai, why it’s so popular, and what to expect when at a boxing match in Thailand.

Muay Thai is more than just a martial art. It’s a national sport, a community, and a way of life. It is entrenched in Thai culture and is respected all over the world.

I spent many years training Muay Thai at multiple gyms all across Thailand—everything from a tiny camp in a mountain village outside of Chiang Mai to a tropical island training retreat and even with the legendary Muay Thai champion Buakaw Banchamek himself at his gym in Bangkok.

Training in Thailand has given me the opportunity to spend time with plenty of professional fighters, as well as a deep appreciation of the Thai boxing culture. For anyone who’s new to Thai boxing, here’s a handy guide to Muay Thai as a martial art and what to expect at an authentic boxing match in Thailand.

What exactly is Muay Thai? 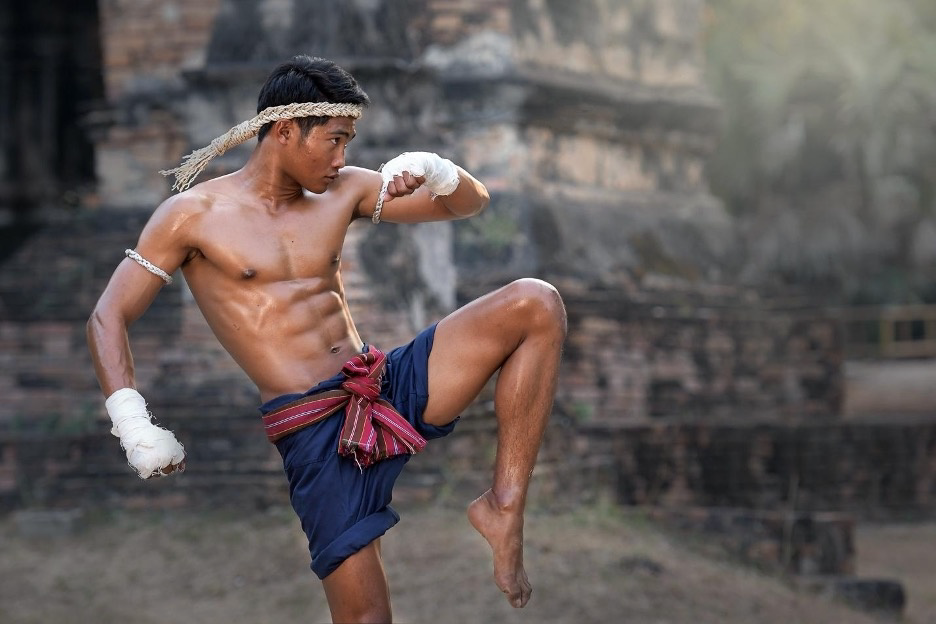 ‘Muay Thai’ literally translates to Thai boxing. It’s a martial art developed around the 13th century and used by Thai soldiers when not fully armed. Some of the strikes developed around that time (attacks that target the joints and the back of the head) are now considered forbidden techniques.

Interestingly, Muay Thai was popular across every facet of early Thai society. King Phokhun Sri In Tharatit, the first monarch of what was then the Sukhothai Kingdom, famously sent his two sons to learn this martial art for strength and discipline.

Muay Thai is Thailand’s national sport and is often also referred to as the Art of Eight Limbs: fists, feet, elbows, and knees.

Muay Thai as a Martial Art

The boxer on the left executes a knee strike while receiving a right hook. Source: StudioByTheSea / Shutterstock.com

Most of the top mixed martial arts fighters include Thai boxing as one of the staples in their arsenal for a reason: Muay Thai is extremely effective as a combat art, relying on a multitude of signature strikes to dish out some serious damage.

Elbow and knee strikes have huge advantages in close-quarters fighting or in clinches, but they’re also less likely to result in injury to the user, because those parts of the body are much better designed for taking impact. Fighters wear gloves as much to protect their opponent as to protect their own hands, since the bones in your hands and feet are far smaller and more delicate.

To understand how effective Muay Thai really is, consider this: Ivan Drago, the fictional Russian heavyweight boxer in Rocky IV, boasted a punching power of 2,150 pounds per square inch (psi). But can anyone really hit that hard?

In real life, a heavyweight boxer’s punch can deliver about 1,000 psi—still more than enough to whip someone’s brain against their skull and cause a knockout. A Tae Kwon Do back kick clocks in at a respectable 1,400 psi.

A Muay Thai knee in a clinch from even a middleweight fighter can hit exactly as hard as Ivan Drago.

What’s happening here is the fighter is pulling their opponent’s torso down while driving their knee up. That surface area is far smaller than a boxer’s glove, which increases psi and can easily fracture a sternum and shatter rib cages. It’s a wonder Rocky ever survived to do four more movies.

For those of you who are interested in learning Muay Thai but got a little scared at references to brains hitting skulls and shattered rib cages, fear not! You can easily undergo Muay Thai training as a workout, without ever getting hit. Thai boxing is a great cardiovascular exercise that can also condition your body into a lean sculpture of a human Adonis.

In fact, people from all walks of life train in Muay Thai for their own reasons. Some learn it for self-defense, and Thai boxing is a great system of strikes that allows you to hit hard, without hurting yourself.

If you want to fight professionally, Muay Thai is a very strong choice, both because it offers many avenues to compete in Thailand and because of its proven effectiveness in MMA.

An often-understated reason is the sense of community. Training can be a great avenue to connect with different people, and in Thailand, I’ve met people from all over the world and gone on all sorts of trips with them across the country. In my experience, a little friendly sparring goes a long way to breaking the ice with new travel companions.

There are competitive venues all across the country, but the biggest ones are all in Bangkok. Lumpinee Boxing Stadium, Rajadamnern Stadium, and Channel 7 Stadium have hosted many of the country’s major prize fights and are your best bet after the COVID-19 crisis has passed.

Professional bouts are usually 3 – 5 rounds. Strikes are counted when they hit without being blocked, but fighters can also score points for dominating the clinch or knocking their opponent to the ground with a leg sweep.

Muay Thai fights are quite the events, and boxing fans make for an enthusiastic audience. The first time I went to see a match, I was amazed to see drums and cheer squads, as well as more reactionary gasps and yells than a 90’s sitcom.

Unique to traditional Muay Thai matches, many fighters will perform a traditional dance before they fight. This is called Wai Kru and is a way to pay respect to their trainer as an esteemed teacher. Many fighters start training at a very young age, making their trainers a major figure in their lives.

While performing this pre-fight ritual, fighters don ceremonial headbands (Mongkol) and armbands (Pra Jiad). The head is the highest and, therefore, most spiritual part of the body in Thai culture, so the Mongkol headband holds incredible significance in Muay Thai. The fighter must earn the right to wear one to represent his/her gym and trainer in the ring.

The Pra Jiad, meanwhile, can be traced back to the old practice of Thai soldiers wrapping a piece of cloth from their mother’s dress around their arm as a token of good luck before going off to battle.

Unlike western boxing, where many fights drag on and push the fighters to complete exhaustion, Muay Thai fights are over fast, which means you’ll get to watch several matches in a row, with fighters going all out towards the end.

Many of the fighters are seasoned professionals with hundreds of fights under their belt by the time they retire. Buakaw Banchamek, one of the most renowned Muay Thai fighters in the world, has a professional record of 239 wins, 24 losses, and 12 draws over a 20-year career.

Thai boxing has earned respect among martial artists and professional fighters, but it also has plenty to offer casual enthusiasts. I’d always wanted to learn Muay Thai, and training in Thailand was a chance to challenge myself in a really dynamic way that’s different from hitting the treadmill or lifting dumbbells.

From its rich lore to the spectacle of professional matches, learning more about Muay Thai can deepen your understanding of Thai culture. Should you find yourself in Thailand, why not catch an authentic Thai boxing match or check out some of the local training camps? You might get hooked.