Thai fashion is magnetic, especially its distinctive traditional costumes, but many people are nervous about putting on their first Thai dress. The double-edged sword of Thailand’s distinct culture is that its intricate social rules can heighten anxiety around cultural appropriation.

However, if you do your due diligence, you’ll find that Thai people are always very appreciative of those who do their best to observe the etiquette of wearing traditional outfits.

One way is to identify a few special occasions to don this beautiful ensemble. Luckily, there are plenty of excellent opportunities out there just waiting for you to seize. But first, let’s look at some sartorial symbolism.

Colors and patterns in Thai clothing 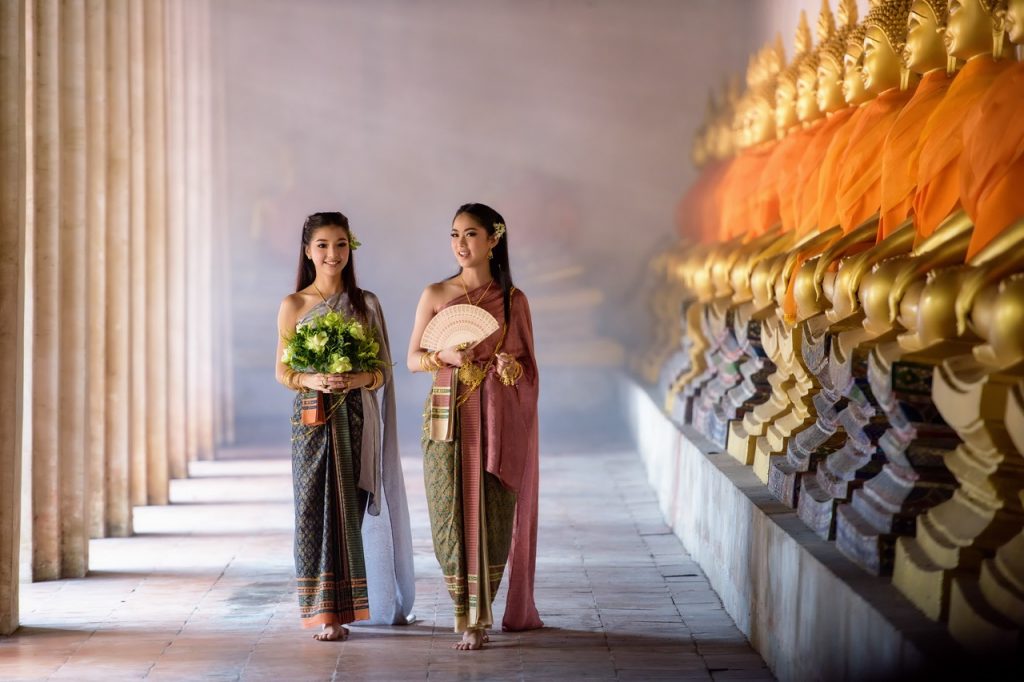 The majority of colors used in traditional Thai clothes in the past often symbolized the occasion of which the wearer was present. For example, if you wore red to a wedding, it would be frowned upon, given that red is the same color as blood and was thought to bring bad luck to the bride and groom. However, today, this color is now socially accepted by most Thais at modern weddings and can be commonly found in stores.

One color you do need to avoid is black, as it signifies bad luck and is thought to attract bad spirits in Thai culture. This color is only socially acceptable when attending a funeral. 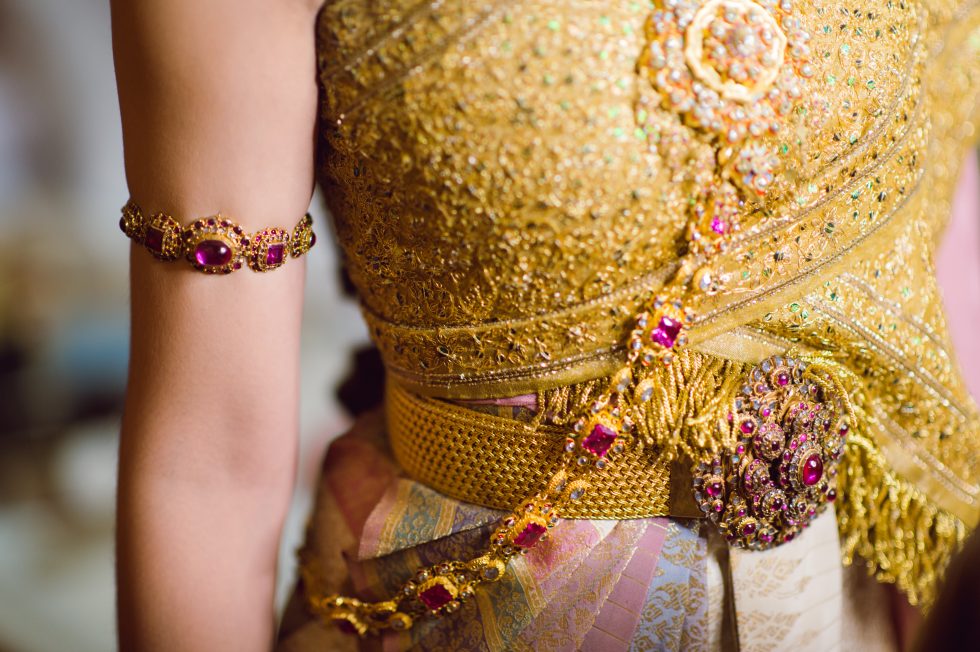 Symbolism is important to the Thai people. There are many elegant patterns used in Thai culture and these are often found across a variety of media, including architecture, ceramics, and, of course, clothing.

These patterns embody designs inspired by nature: trees, leaves blowing in the wind, flames, lotus blossoms, orchids, elephants, and trellises. Many of these patterns date back hundreds of years and have their own fascinating histories.

Symbolism is also seen in the various gilded accessories worn with Thai clothing. Long ago, when the first Hindus made the journey to Siam from India, they brought with them their jewelry craftsmanship, which were adopted by the Mon and Khmer civilizations and gradually developed into their own artistic identity.

Indian jewelers often made use of gold and rubies in their works, and we can still see remnants of that Indian past in the extravagant works of the Ayutthaya period and even today. The headwear, belts, and bracelets worn with Thai outfits are reminiscent of those worn by the mythic characters of the Ramayana epic. 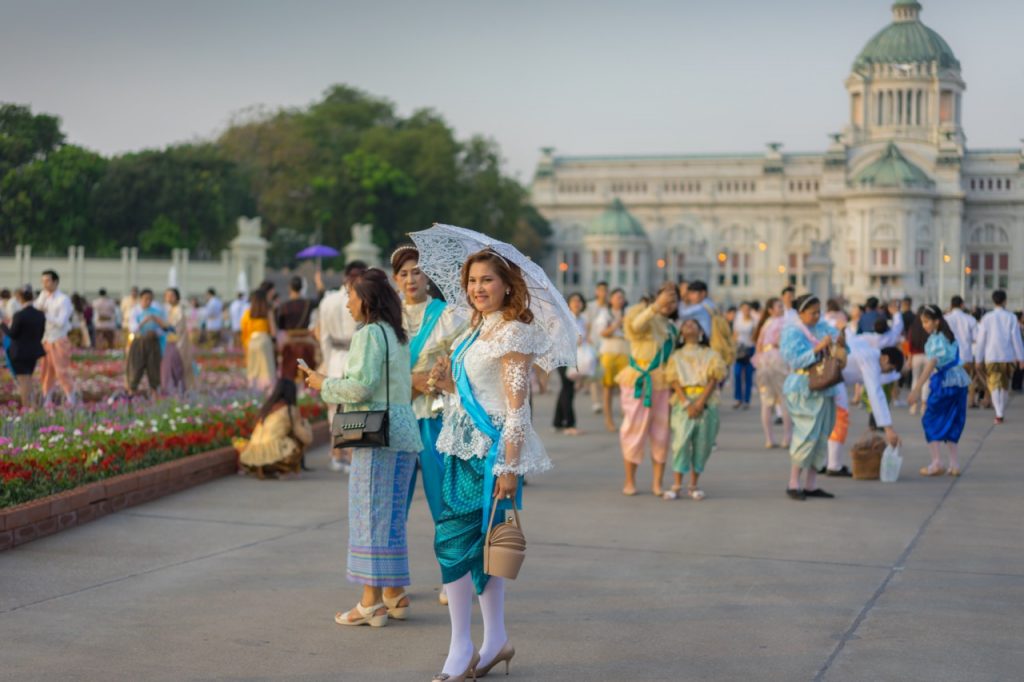 There are all sorts of traditional Thai holidays throughout the year where it is customary (or at least encouraged) to wear Thai outfits.

Perhaps the two biggest such Thai holidays are Songkran and Loi Krathong.

Songkran is the Thai new year which takes place in April. While in some parts of the country it’s often an excuse to grab a large water gun and party in the street, many other parts of the country still celebrate it the good old-fashioned way: with morning merit making and light water splashing, all while wearing Thai clothes. Songkran is an important time in Thailand as it’s when many people who have come to work in the big cities go back to visit their families in the country.

Loi Krathong, which falls in November, is when beautiful candle-lit krathongs festooned with flowers and banana leaves are set afloat on water bodies all across the countries as the full moon rises into the night sky. In the north, floating lanterns are released into the sky. It is believed that these lanterns carry away your negative thoughts and venerate the Lord Buddha with light. At Loi Krathong, traditional outfits are often worn as well.

The most common styles of dresses worn during these holidays are the Boromphiman, Ruean Ton, and Chakri. 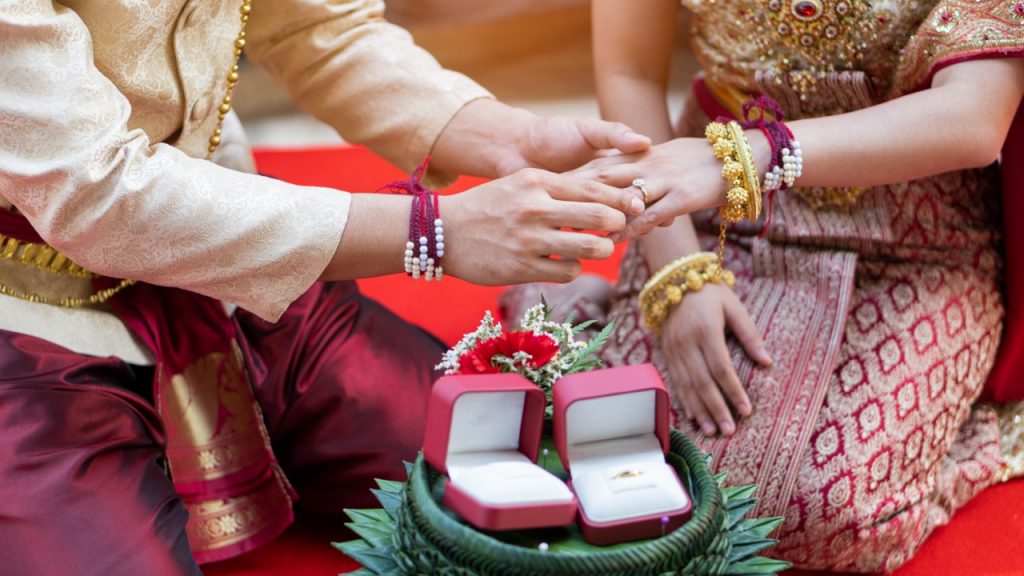 Many weddings in Thailand are split into the morning ceremony and the evening reception. More and more, we see people at these events wear their traditional Thai outfits in the morning and then change into more modern suits and gowns in the evening. Imagine picking out two wedding dresses!

While there is no standard wedding outfit in Thai culture, brides typically choose from one of Chakri, Chitralada, Amarin, or Boromphiman styles that best fit their body type. Thai bridal “gowns” are typically two-piece, either with a form-fitting, long-sleeve silk top or a sabai (shawl) wrapped around the chest. The groom usually wears a similar white form-fitting, long-sleeve top with chong kben trousers.

Again, when attending a wedding in traditional attire, it’s important to avoid the color black, as this color is to be only worn during funerals and is thought to bring bad luck to the bride and groom. 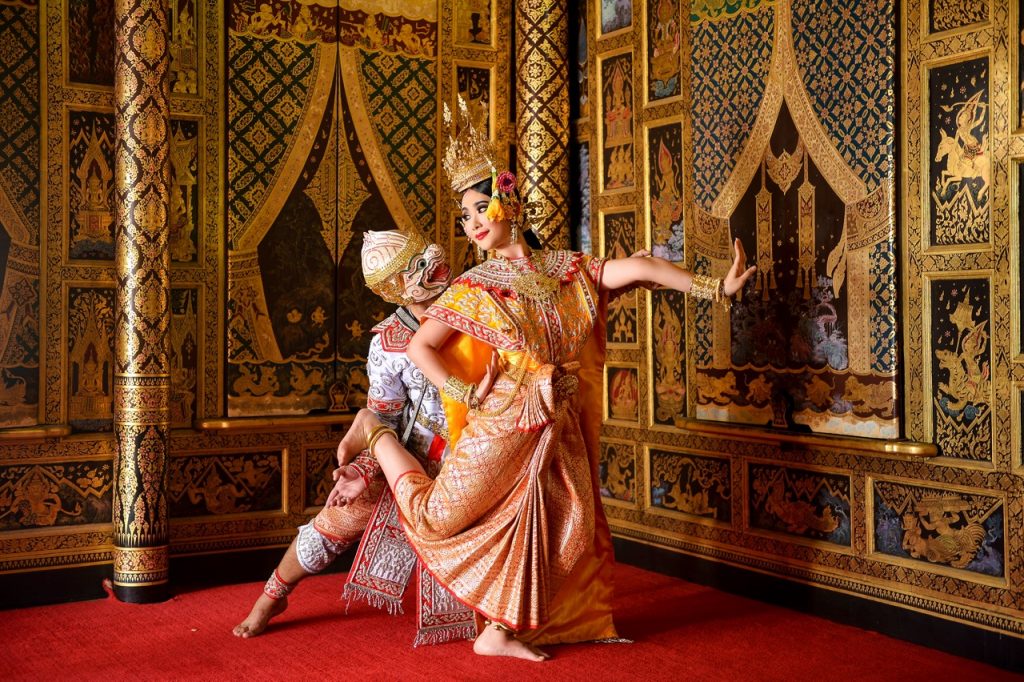 Perhaps the most common reason to see someone decked out in their full traditional outfit complete with accessories is during a cultural performance. It is customary for many Thai dancers and musicians to wear these outfits during a show.

There are many forms of ram thai, or traditional Thai dance, and a lot of them have their own spin on what outfits work best. This form of dance is easily recognizable by the signature curved arch of the dancer’s fingers.

As for Thai music, you often see Thai outfits worn by players of the Thai ranat (a large type of xylophone) and the khim (hammered dulcimer) among other interesting Thai instruments. 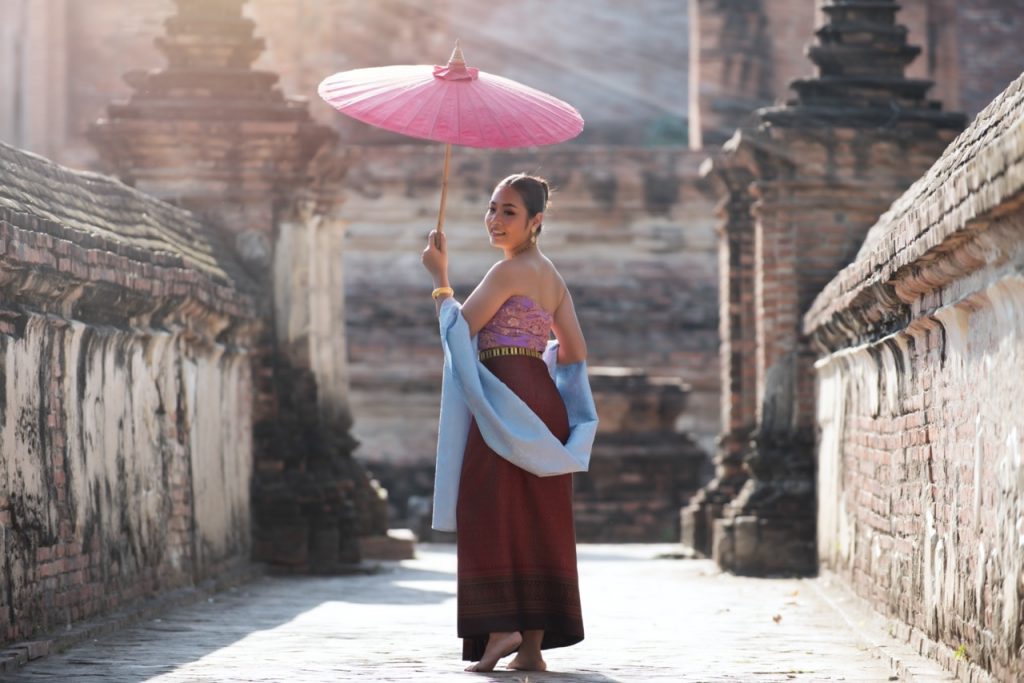 There are a number of ancient historical attractions around Thailand where it is very common to see people wearing traditional outfits.

Some of these include UNESCO sites like Sukhothai Historical Park and Ayutthaya Historical Park, beautiful locations that give a glimpse into Siam’s majestic past. The spectacular ruins speak of a time gone by where glittering gold pagodas towered above wooden cities on stilts.

There are also many cities in Thailand that have an old quarter, or muang boran, where remnants like the old clay brick walls of Chiang Mai and the cannon turrets of Bangkok are juxtaposed against a modern metropolis.

Whether people wear these outfits at these places to really immerse themselves in the moment or whether it just makes for an excellent photo op, the fact remains that it looks pretty cool. The Queen Sirikit Museum of Textiles at Ratsadakhorn-bhibhathana Building at the Grand Palace Bangkok.

There are also several museums where wearing a Thai dress would be exceptionally “on brand.” The Queen Sirikit Museum of Textiles (QSMT) collects, reserves, and showcases textiles from Southeast, East, and South Asia, with an emphasis on the textile heritage of Thailand and the couture wardrobe of Thailand’s original fashion icon, Her Majesty Queen Sirikit, the Queen Mother.

The museum is located in Ratsadakhorn-bhibhathana Building at the Grand Palace in Bangkok and is putting on several exhibitions in celebration of its 10th anniversary.

At the end of the day, wearing a full outfit of traditional Thai clothes is just like putting on a ball gown or an elegant suit. Sometimes you just want to look good and you don’t really need a reason (though you may get some questions). Then again, you could mix and match something modern with something Thai for a more casual look.

On March 28th, 2021, Thailand saw its first Surf Skate Festival that invited people to go out into the streets with their skateboards dressed up in Thai traditional garments. Groups of children and young adults rolled up on their boards wearing Thai outfits with sneakers.

There are quite a few events throughout the year where you can put on a Thai outfit if you’re observing social traditions. However, you needn’t feel limited to those. While it’s good to consider cultural appropriation, in Thailand, as long as you are respectful, people will always appreciate it when you incorporate their culture and customs.

So, go out and pick yourself a great chut thai for the next special occasion. Support local textiles, and embrace the elegant Thai look.

Michael graduated from the University of Waterloo in Ontario, Canada where he studied Civil Engineering. After working in the engineering field for a few years, Michael moved to Thailand where he worked as a lecturer at Silpakorn University, a translator, a language consultant, and a construction manager before he began his acting career in 2013. Since then, he has worked in television, film, online platforms, and cartoons as an actor, writer, and producer.