On November 21st, 2019, tens of thousands of Catholics gathered at Supachalasai National Stadium to welcome Pope Francis during his historical visit to Thailand. Excitement and joy filled the air as the large crowd patiently waited to welcome their Pope and join in the papal mass. For the younger generation, it was the first time they had ever seen any pope in person since the nation’s first ever apostolic visit took place thirty-five years ago. 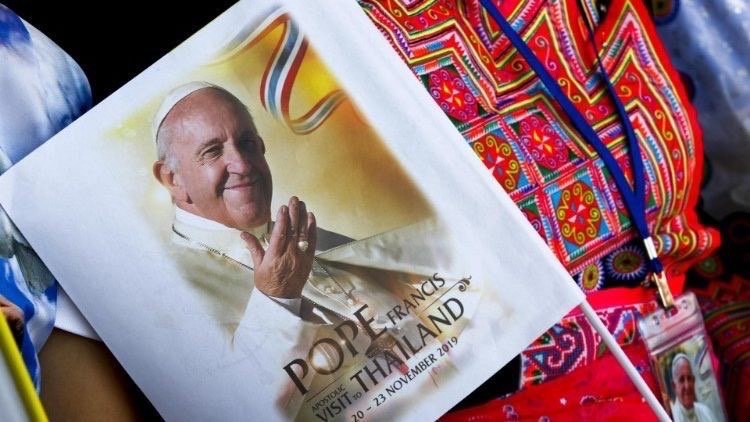 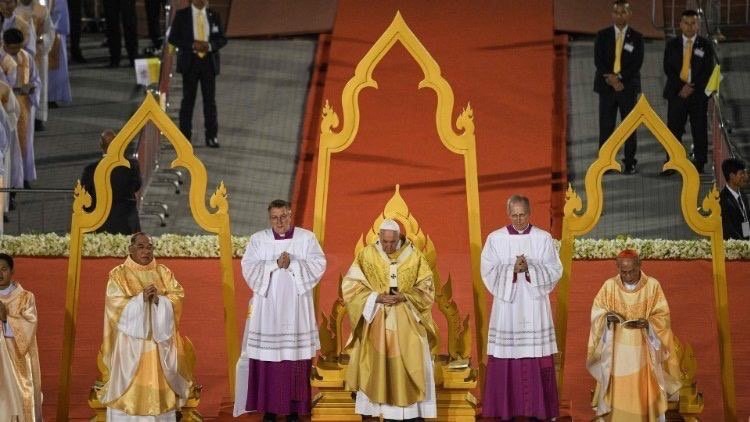 In 1984, upon his arrival in Thailand, Pope John Paul II knelt down as he disembarked from the aircraft and kissed the ground, a gesture expressing humility, love and respect for the country and its people. Then His Majesty, the present King, the then Crown Prince, welcomed the Pope and accompanied him to an audience with the then King Bhumibol Adulyadej and Queen Sirikit, the present Queen Mother. The warmth that radiated from the photograph capturing Their Majesties’ greeting Pope John Paul II became an image firmly imprinted in the memories of Catholics and non-Catholics alike in Thailand.

Almost four decades later, the meeting between the present King and Queen and Pope Francis echoes not only the close bond of friendship cultivated over centuries between Thailand and the Vatican, but also speaks volumes about the monarch’s pivotal role as a unifying force and an upholder of all religions in the promotion of interfaith harmony and peaceful coexistence in Thai society. 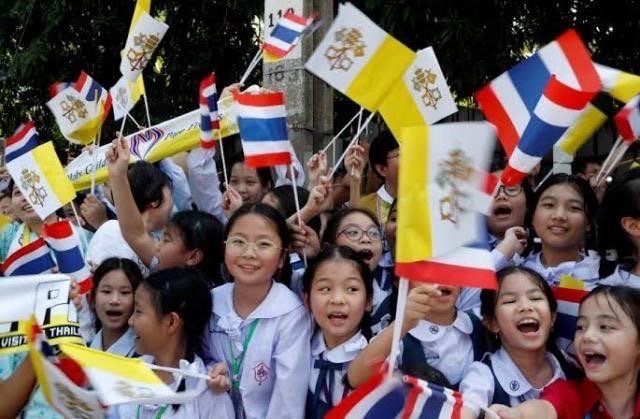 In order to better understand the present, it is vital to revisit the past. Historical evidence shows that Roman Catholicism was introduced to Thailand, formerly known as Siam, by Portuguese traders and missionaries in the mid-1500s and gained a firm foothold during the reign of King Narai of Ayutthaya. Being a professed Buddhist did not deter the benevolent ruler from giving equal attention and importance to the practice of all faiths on Thai soil.

As such, Catholic missionaries were allowed to practice and preach their faith in a predominantly Buddhist kingdom. In return, they shared knowledge of sciences, mathematics, art and languages that supported the nation’s advancement. Moreover, those seeking refuge from religious persecution in their homeland were granted permission to settle in the realm. Plots of land were royally bestowed to build places of worship, schools and healthcare facilities. Since then, close-knit Catholic communities have formed and flourished, with churches at the center of their social, educational and religious lives. Nowadays there are about 380,000 Catholics in Thailand, out of a population of 66 million.

The monarchs of the Chakri Dynasty and members of the royal family have continuously supported Catholics throughout the years. They exerted efforts beyond the call of duty and accorded personal attention to the Thai-Catholic community, from presiding over religious ceremonies to visiting churches and providing financial donations to academic institutions and hospitals. Such patronage has been firmly based on the shared conviction of the monarchy and the Christian church to lift the well-being of the people.

Recognizing that the Christian churches can help fill the gaps in social welfare development, successive Thai sovereigns have continuously assisted various Christian charitable activities that can improve the livelihood of all Thais. When King Mongkut, the current King’s great, great grandfather, was a monk before acceding to the throne, he developed a personal friendship with the Apostolic Vicar of Eastern Siam, Jean-Baptiste Pallegoix. The royal monk taught Thai and Pali languages to the Monsignor while the latter taught English and Latin in return. This acquired proficiency in English certainly enabled King Mongkut to have access to modern knowledge that was essential for national development at that time.

After his enthronement, King Mongkut forged ties with the Holy See by sending a royal letter to Pope Pius IX.  His son, King Chulalongkorn, was the first monarch from a non-Christian kingdom to visit the Vatican in 1897 where he met with Pope Leo XIII.

The promotion of education in the provinces was among the priorities of King Vajiravudh, a shared goal with the Christian missionary work of the early 20th century. In 1906, while still the Crown Prince, he visited the Chiang Mai Boys’ School, which was established by the American Presbyterian Mission. He graciously presided over the cornerstone laying ceremony of the new building and renamed the school “The Prince Royal’s College.” His only child, Princess Bejaratana, took the school under her patronage in 1986. Today the school remains a symbol of pioneering missionary work in northern Thailand.

During his seven-decade reign, beginning in 1946, King Bhumibol Adulyadej, a brilliant visionary, indelibly steered the course of the country’s development and so developed the people’s livelihoods. On several occasions, he granted funds for charitable activities and the construction of Christian hospital buildings, such as the Bangkok Christian Hospital in Bangkok and the McCormick Hospital in Chiang Mai.

Following in the footsteps of his father, His Majesty the King, Rama X, solemnly pledged to carry on these royal initiatives and projects, thus helping to ameliorate their impact for the good of the people. So the noble undertakings and selflessness of Thai royalty have retained a special place in the hearts of many Christians, continuing to inspire charitable work, such as providing homes for homeless children and underprivileged students with opportunities in education and vocational training, enabling them to be self-reliant.

The special bonds between the monarchy and all religious communities in Thailand were exemplified by the royal audience of His Majesty the King during the coronation ceremony in 2019. On May 6th that year, representatives of the Roman Catholic, Presbyterian and Protestant churches, together with the Sheikhul Islam of Thailand and the Sikh community were among those who had the privilege to present their sincere greetings in person to the new monarch before he delivered his first royal address to the people after his coronation. 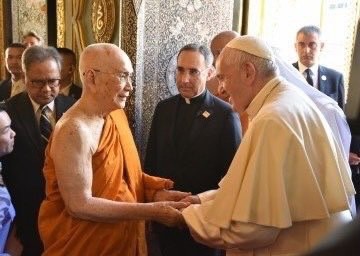 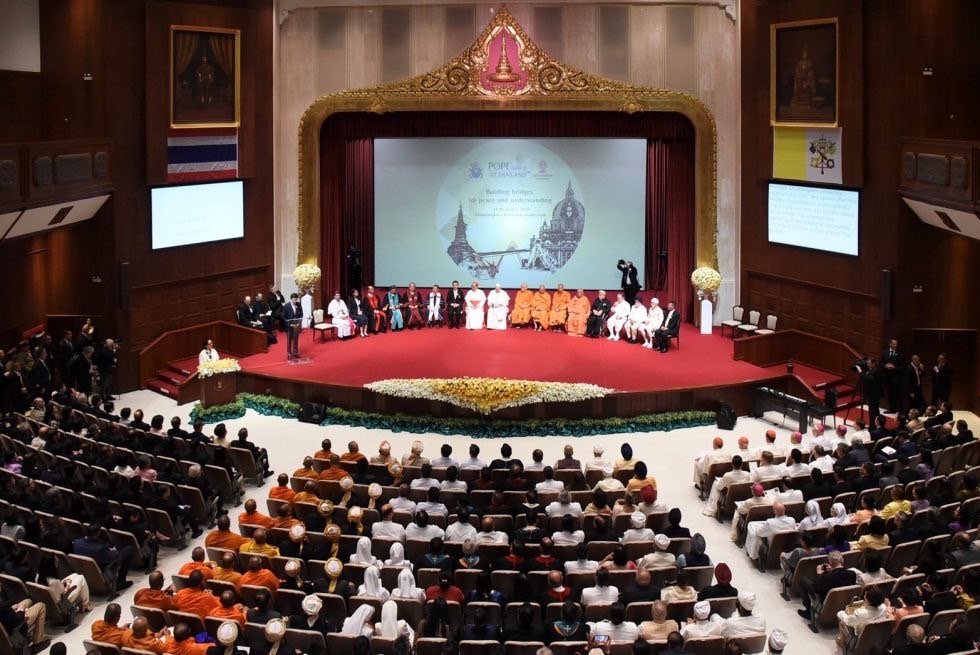 Thailand would not be where it is today if the monarchy did not serve as a pillar of strength and a guiding light, leading by example and wielding incomparable moral authority. The generosity, thoughtfulness and embracing of diversity extended from the sovereign have shaped the nation and countless lives. Following their monarchs, Thais have adopted a mentality of openness and mindfulness of the differences among faiths and religions, and most importantly, a profound respect for those differences. The actions of the monarchy have indeed forged connections, furthered interreligious understanding and demonstrated that, regardless of what faith we hold, we are bound together by goodwill and shared values of kindness and respect. 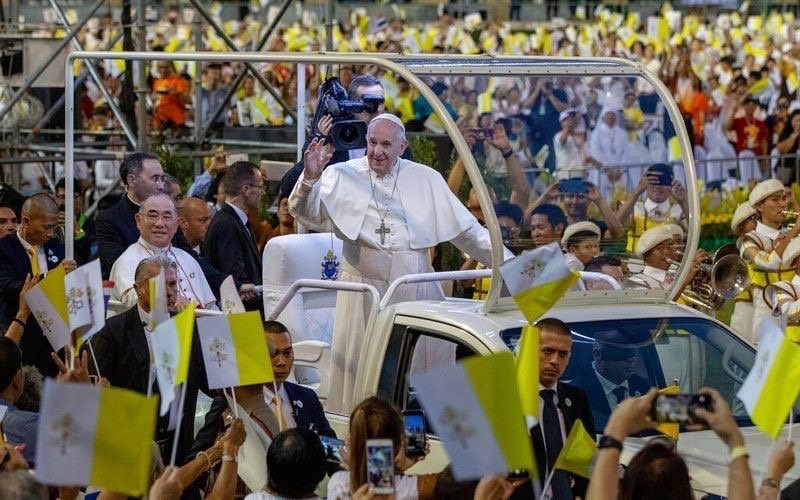 Pope Francis arrives at the National Stadium for the Holy Mass on November 21st, 2019, with the Archbishop of Bangkok, H.E. Francis Xavier Cardinal Kriengsak Kovithavanij, seated behind him. Source: Naewna.com

H.E. Francis Xavier Cardinal Kriengsak Kovithavanij received his Masters Degree, the Licentiate of Spirituality from the Pontifical Gregorian University in Rome, Italy. He was consecrated as Bishop of Nakhon Sawan on June 2nd, 2007 and installed as Archbishop of Bangkok on August 16th, 2009. His positions at the Catholic Bishop’s Conference of Thailand from 2009 to the present include President of the Episcopal Commissions for Pastoral Care of the Christians and President of the Catholic Commissions for Liturgy. In addition, Cardinal Kriengsak is a member of the Pontifical Committee for International Eucharistic Congresses.