Thai listed companies have made progress in enhancing gender diversity in the boardrooms and in other levels of management, with more women than ever serving as their directors or the highest-ranking executives.

Globally, female representation is on the rise on corporate boards as diversity is believed to contribute to better decision-making and results. Amid some doubts on the benefits of their presence, the majority of lawmakers and business owners are supporting the United Nations Sustainable Development Goal 5: Achieve gender equality and empower all women and girls, in their bid to make a better world.

In this endeavor, many Thai companies fulfil their part by appointing at least one woman to their boards, as required. At the end of 2020, based on a research by the Stock Exchange of Thailand that covered 731 companies, 87.3 percent of them had at least one female director on their boards. In comparison, women held at least one board seat of 79.4 percent of local listed companies in 2015.

Listed companies with an absence of any female director on their boards may need to step up their efforts as the Securities and Exchange Commission (SEC) aims to raise female presence in corporate boards to at least 30 percent this year, initially for 30 percent of all listed companies. Soon, this requirement will cover all companies.

As SEC’s targets are not so far-fetched, it turned out 24 percent of total listed companies had more than 30 percent share of women in the board seats at the end of 2020. These companies appointed 1,224 female directors or 22.23 percent of all 5,506 directors. The ratio slightly increased from 22.09 percent at the end of 2019. Some female directors also served more than one company as they occupied 1,475 director seats or 21.02 percent from a total of 7,017 director seats, compared to 20.72 percent in the previous year. 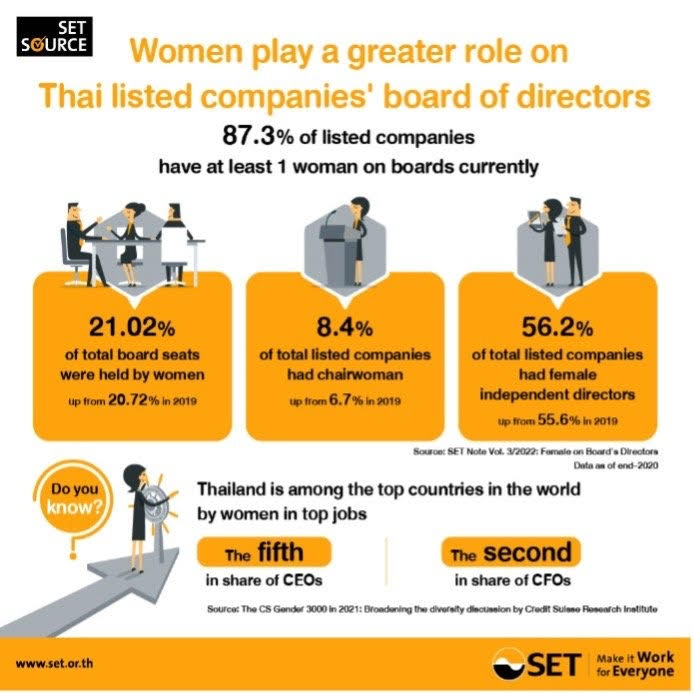 Gender diversity in corporate boardrooms and senior positions is a global phenomenal. Some countries impose a quota system to force an increase in female representation. Though actual benefits to the corporate performance may remain disputable, it is believed that the quota will bring positive externalities as female leaders serve as role models, inspire and provide motivation for more women to pursue education, career and leadership potential.

The article is based on SET Note Vol. 3/2022: Female on Board’s Directors.